How Loud Are 3D Printers and Making Them Quiet.

When someone asks me for advice about getting into 3D printing the question of noise often comes up. Some people worry that the noise from a 3D printer will disturb their family or neighbors.

The amount of noise produced by a 3D printer depends upon the style of printer. In general home use 3D printers range from 15db up to 75db at approximately 1 foot away from the printer.

How Loud is a Typical 3D Printer?

To test the sound levels of my printers, I used a handheld decibel meter to get an approximate decibel (dB) average for each printer.

We also need something to compare the results with. Here are a few examples of noises and their average decibels:

What do we mean by an open printer? An open printer has no enclosure exposing most of the moving parts to the room. Below is a picture of my Printrbot Play: 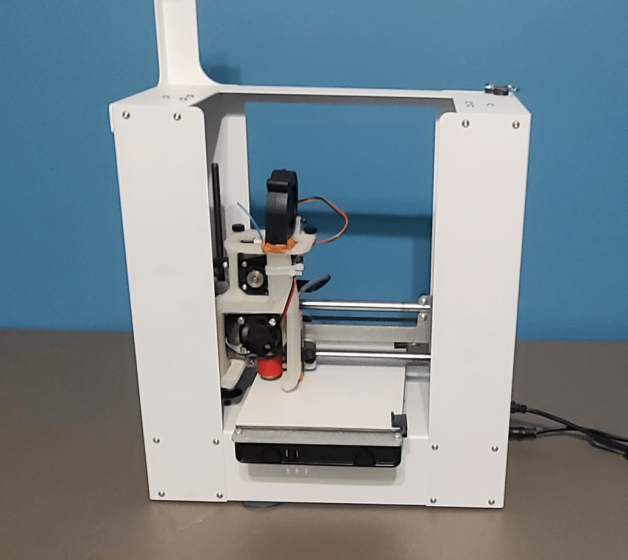 A 3D printer that has the entire build area inside of a container is considered enclosed. The below image shows my Wanhao Duplicator 6 which is an enclosed printer. 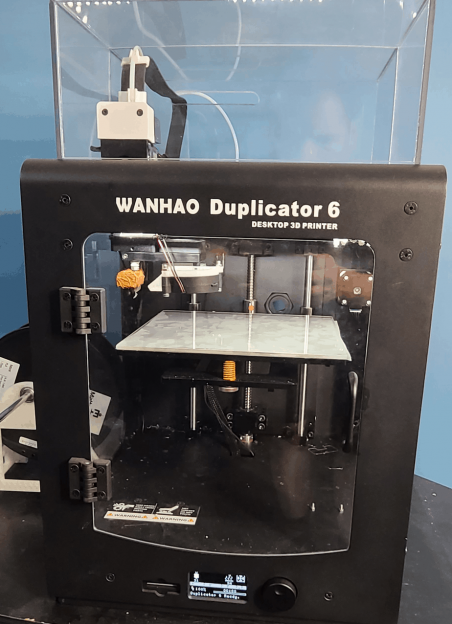 As you can see in the picture the entire build area and all the moving parts are enclosed by the walls and acrylic hood. The enclosure serves to keep heat, noise, and smells inside the printer while it is running. Without exposed moving parts enclosed printers are quieter than open printers. Using the sound meter app, I found that my Duplicator 6 had an average of 54dB while printing. This is quieter than a normal conversation but louder than average home noise.

For this test I used my Elegoo Mars resin printer.

After testing my 3 printers the results are as follows:

It surprised me to find that my Wanhao was the quietest of the 3 printers. I expected that the Elegoo would make the least noise as it only has one motor. The cooling fans in the Mars move a lot of air and they make up the bulk of the noise. While testing the movement of the build plate only added 1dB.

Not surprisingly, the PrintrBot Play was the loudest of the three. Once again, fan noise comes into play. I have a large blower fan used for print cooling that moves quite a bit of air. The extruder fan is not fitted as tight as possible to the heat break. This causes the extruder fan to be noisy when it is running. Most of the noise seemed to come from the fans on the printer and not the motors and movement.

Both the PrintrBot and the Wanhao are in my office. I can easily use the Wanhao without being distracted by the noise. For the PrintrBot I try not to run it while I am working in the office. The noise is tolerable for short periods of time but becomes tiresome after a while. Since my resin printer is in the garage, I don’t have any issues with the sound.

While I only tested 3 printers, the results should give you an idea of range of noise. In my research I have found few articles about the noise level of 3D printers. Even fewer articles that included actual tests and decibel readings. I wanted to provide you with information on what noise levels you can expect from home printers. If noise is a concern, this information should help you determine which printer is right for you. If you already have a printer and are looking for ways to reduce noise read on.

I need to point out that the PrintrBot and the Wanhao have motor dampers installed. Dampers have a dramatic effect on the noise a printer makes. We’ll discuss motor dampers later.

What makes noise in a 3D printer?

The simple answer is if it moves, it makes noise. There are many moving components in a 3D printer including:

All these items make some amount of noise when they move. The main culprits are the motors, fans, and bearings. The printer uses a series of motors to move the print head and print bed to print. The motors can cause the frame to resonate while moving which amplifies the noise. Fans can be loud when running to cool the extruder and other components. As the print head moves around bearings slide along linear rails. Without proper lubrication the rails and bearings can scrape against each other.

Resin printers have fewer moving parts. One stepper motor to move the print bed up and down and cooling fans. The cooling fans make the most noise in a resin printer.

Each of these items can add to the noise level of your printer. Next we will look at ways to reduce these noises.

One method of reducing noise in a 3D printer is to install dampers (Amazon link) on each of the stepper motors. This method only applies to FDM printers as most of the noise from a resin printer comes from the cooling fan. 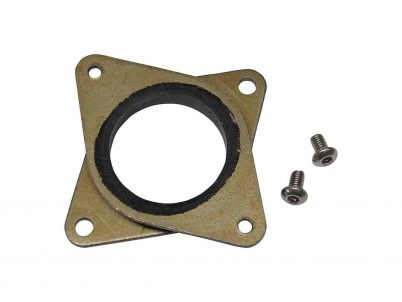 The dampers are installed between the motor and the 3D printer frame. The picture below shows the damper installed on the Y-axis of my PrintrBot. 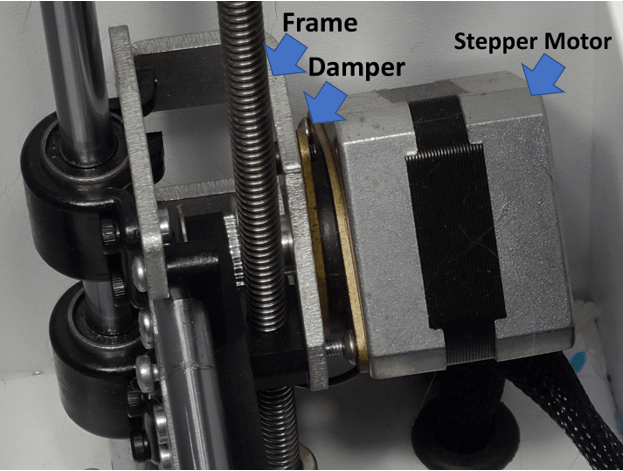 The two brass plates are attached to the stepper motor and the printer frame. The rubber spacer between the two plates absorb vibration from the motors. Absorbing the vibrations prevents the printer frame from resonating and amplifying the sound. A major reason 3D printers are noisy is because they do not deaden the sounds created by their moving parts. The metal frames resonate and amplify the noises from the printer. The dampers also reduce vibrations of the printer, another major cause of noise.

Use Decoupling to Eliminate Noise

A recommended method for decoupling is to use a concrete paver and foam blocks. If you’re looking for a quick and easy way to decouple the printer place a thick foam or rubber mat between the printer and table. A thick yoga mat can work in a pinch.

A word of caution: Be sure whatever you place under the printer doesn’t block airflow to the motors or electronics. Preventing airflow can lead to parts overheating and failing prematurely.

Keeping your printer properly lubricated can reduce noise. Lubrication will allow the parts to move without sticking increasing print quality. This is a win-win situation!

Examine your printer to see where bearings travel along the linear rods. Wipe these areas down with a lint free cloth to remove any debris. Apply a thin layer of synthetic oil to linear rods. Add the same type of oil to any threaded rods on your printer.  I highly recommend getting a precision oil applicator (Amazon link) to apply the oil exactly where you need it.

Check for loose bolts, nuts, and screws on your printer. Loose hardware can cause a variety of noises. Ensuring everything is tight and secure will help with noise and print quality. Proper maintenance will also extend the life of your printer.