What Does 3D printing Smell Like? Things You Should Know

Sometimes my students will ask me if 3D printers smell while they are printing. Other people ask me because they want to get into 3D printing and worry it will smell up their house. In this article we will examine the smells behind 3D printing.

All 3D printers will have some amount of smell when printing. With filament printers the smell can range from sweet honey-like to burning plastic. Resin printers often have strong chemical smells of plastic and solvents.

The smell that happens when printing depends on the type of printer and the material used in the printer. With Fused Deposition Modeling (FDM) printers the smell comes from the heating of the plastic filament. Resin printers use vats of resin that hardens with exposure to UV lights or lasers. The smell from these printers come from the chemical makeup of the resin.

The Smells of 3D Printing

I want to limit the scope of our discussion to smells that a home user would want to know about. We will split our answer between the two major types of printers that you would buy and use at home, FDM and Resin.

FDM printers work by melting the plastic and fusing it together. To melt the plastic an extruder nozzle heats to temperatures between 190° to 270° Celsius. As the plastic passes through the nozzle the plastic melts and fuses to the previous layer as it cools. This heating and melting of the plastic cause the plastic to release gases and volatile organic compounds (VCOs). The gases and VCOs are what you smell when 3D printing.

Common Filament types and Their Smells 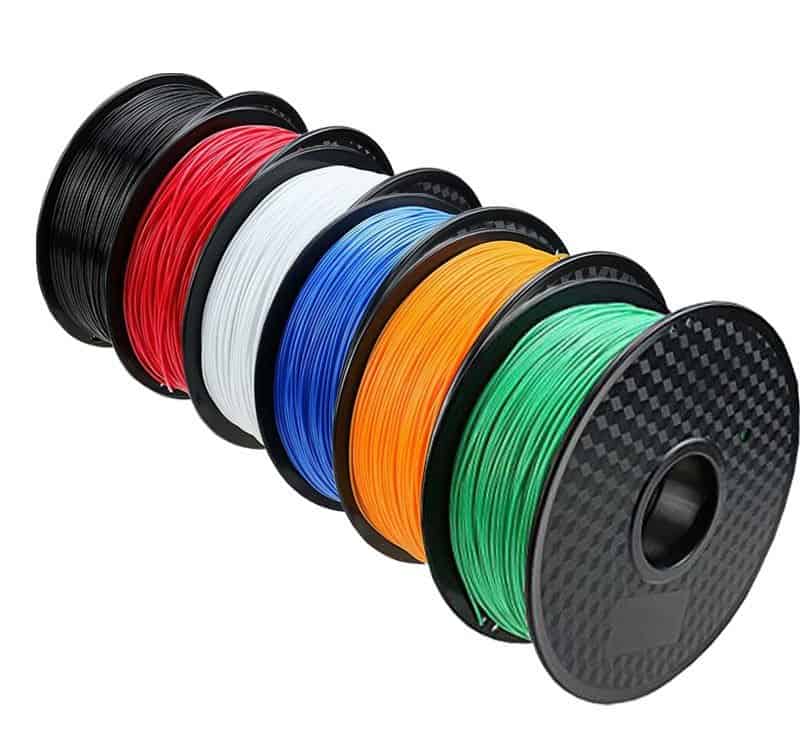 Acrylonitrile Butadiene Styrene (ABS) is a common filament type known for being tough and impact resistant. ABS prints at a nozzle temperature of 240°C – 270°C and gives off a harsh burning plastic smell.

Polylactic Acid (PLA) is one of the favorite filaments of the 3D printing community. It is a biodegradable thermoplastic derived from renewable sources such as cornstarch, sugar cane, and potato starch. PLA requires a much lower nozzle temperature than ABS printing between 180°C and 220°C. Along with a much lower printing temperature PLA produces less odor when printing. Due to the plant-based materials it gives off a smell that can have a honey-like aroma. This is subject to opinion as some people cannot stand the smell of PLA while it is printing.

Polyethylene Terephthalate (PET) is used for mechanical parts that need flexibility and impact resistance. PET offers more flexibility than ABS while maintaining strength. PETG is printed at temperature like ABS between 220°C and 250°C. Unlike ABS it does not give off noxious fumes when printing. PET does not produce an odor when it prints.

Glycol modified Polyethylene Terephthalate (PETG) is a variant of PET filament that increases the materials durability and impact resistance. Unlike PET this material will not absorb water. PETG is also considered food save and can be used for cups, plates, and food containers. It prints at the same temperature range as PET and does not produce an odor when printing.PolyEthylene coTrimethylene Terephthalate (PETT) is another modified version of PET. PETT is considered food safe and is approved by the FDA. It prints cooler than PETG between 210°C and 230°C. PETT does not give off an odor when printing.

Polyamide (Nylon) filament is a synthetic polymer used in industrial applications. Nylon is strong, durable, and flexible. Printed between 220°C – 250°C, Nylon is perfect for industrial parts such as; gears, bearings, and mechanical components. The downside to nylon is that it emits toxic fumes when printing. This is important to know as nylon does not produce and odor when it prints. Nylon is toxic and should be used in a well-ventilated area.

Wood filament is made with recycled wood and polymer binding. It is used for more decorative applications as it is one of the weaker printing materials. Printed in the same nozzle temperature range as PLA at 195°C-220°C and will give off a smell of burning wood.

The smell produced from resin printers is a byproduct of the chemicals the resin is made from. Unlike FDM, the resin has a consistent smell even when not printing. Most resins are toxic to breathe and get on your skin. Caution should be used when working with resin printers.Each manufacturer will use different formulas in their resins and each type will have different smells. Resin types include:

Standard resin is your basic and usually lowest priced resin. It can come in a variety of colors and is opaque in appearance. Standard resin typically has low viscosity allowing the resin to flow freely during the printing process. Standard resins are designed to reduce part shrinkage when cured. Standard resins also tend to be brittle when cured and may not work well for functional parts requiring high strength.

Casting resin is used in various industries like jewelry making and metal casting. This resin is designed to be “burned out” in a process like lost wax casting. Castable resins tend to be made with waxes that melt when exposed to high temperatures. These resins are designed for this specific purpose and do not work well for other uses.

Flexible resin is ideal for medical devices, anatomical models, special effects props, and anything that needs to bend and move. The main difference between flexible resin is how much flex the final part has.

Unlike filaments all resins give off some amount of odor even when not printing. These resins are not heated up to high temperatures like the FDM filaments. The resin will warm up to around 40°C due to ambient heat of the printer but the resin itself is not heated. The resin temperature will rise during the printing process increasing the odor. It is important to keep a resin printer in a well-ventilated area especially if you have pets or children.

Some resins, like FormLabs clear, have less smell than others. For me, FormLabs clear does not have a noticeable smell while the printer is not running. Again, the smells are subjective, and opinions will vary person to person.

I have three brands of resin at home; Elegoo Standard, Anycubic Standard and Sain Smart Rapid. All three resins are grey and all three have a noticeable smell. When comparing the three, Sain Smart has the strongest smell. I do not think any of the three resins smell bad, but they all have a distinct odor.

How Long Does the Smell Last?

This answer depends on the type of printer and material you are using. For FDM printers, the smell only lasts while the machine is printing. The smell may linger for a few minutes after printing as the filament cools to room temperature.

For Resin printers the smell is persistent even when the printer is not printing. While the printer is running the odor can become stronger. As the machine finishes and cools down the odor will reduce but it will not completely dissipate. You should return the unused resin from the vat back to its sealed container. Clean the vat of any unused resin and replace the vat in your printer. Following these steps will help remove any lingering odors from the print.

There are ways to reduce the odors that come from your printer. The easiest way is to place your printer in a well-ventilated area away from the living spaces of your home. For example, a garage or utility room where you can open a window or door to circulate fresh air.

I understand that a dedicated 3D printing space is not an option for everyone. If you do not have a space that you can dedicate as your 3D printing area there are other options. Another solution is to only buy and use filament that has low to no odor. Filament types such as PLA, PET, PETG, and PETT are great low odor filaments. Each has its own pros and cons for usage with PET/G/T being harder to use than PLA. However, PLA has a very low odor and you may find that it is not strong enough to bother you.

Another option is to buy a 3D printer with an enclosure to help keep the smell inside the printer. If you already own an open 3D printer there are many options for building a DIY enclosure. If you prefer to buy rather than build, there are options such as the Creality 3D Printer Enclosure.

Finally, if you are using a resin printer it will be hard to escape the smell. Even using an enclosure, the ever-present odor of the resin itself is hard to contain. Regardless of the brand there will always be some amount of odor. Be sure to return any unused resin back to the bottle and keep it sealed. The best option is to use a resin printer in a dedicated well-ventilated area for your resin printer. Be sure to keep your family and pets out of the area while using the printer.

Are 3D Printers Toxic? This depends on the type of printer and material used. All consumer grade printers and materials give off VOCs that can contain toxic chemicals. The harshest of these come from resin printers but filaments can give off toxins as well. Nylon is a great printing material, but it gives off toxins when heated for printing. That is why it is important to use 3D printers in a well-ventilated area away from children and pets.

Are 3D printers noisy? Like smells, all 3D printers will make some amount of noise. The amount depends on the type of printer and the surface that it sits on. The average 3D printer is around 50 decibels, about as loud as a conversation between two adults. The noise level can be attenuated by using an enclosure and other methods.You can read my article here about 3D printer noise and how to reduce it.